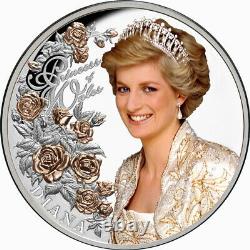 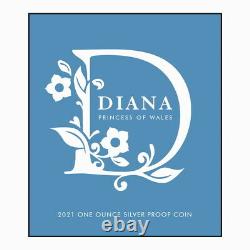 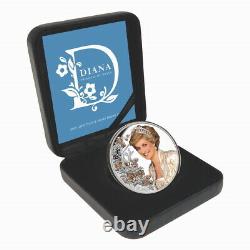 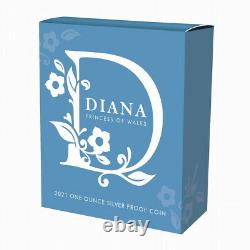 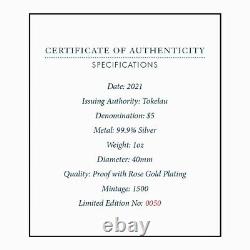 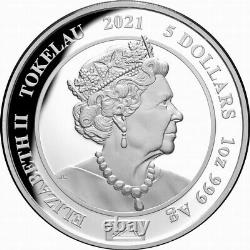 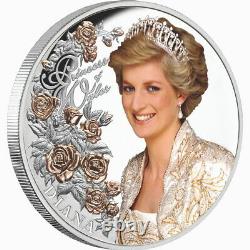 Don't delaymake this outstanding tribute to Diana of Wales, the People's Princess, yours before they sell out! A truly beautiful portrait of Diana in full color is struck to the highest proof quality on one troy ounce of pure silver, with each intricately engraved rose bud and blossom further enhanced with rose-gold plating!

Talisman Coins is truly thrilled to offer you this rare, pure silver proof remembering the life of Princess Diana. Diana would have turned 60 years old on July 1st, 2021. We mark this occasion with this fitting, memorial tribute program to the People's Princess. Two beautiful coins celebrate the life of a truly beautiful woman and person, sadly stolen from us decades before her time. Diana, Princess of Wales, was a member of the British royal family. She was the first wife of Charles, Prince of Wales, the heir apparent to the British throne, and mother of Prince William and Prince Harry. Diana's glamour made her an international icon, while her kindness, philanthropy and activism earned her enduring popularity.

Her unprecedented public image brought her intense media scrutiny, exacerbated by her tumultuous private life. Following her tragic death an an extremely young age, the legend of Lady Diana Spencer, the Princess of Wales, the Last Rose of England, and the People's Princess has only grown as time has passed. Struck from 1 troy ounce of 99.9% pure silver, and exquisitely packaged with an individually numbered certificate, this gorgeous proof finish coin represents a sensational limited edition tribute to the courageous woman who broke the mold of staid and stolid royalty, redefining what it means to be a princess in the modern world. Two different technologies, full color and 24-karat, rose gold plating, contribute to this artistic masterpiece.

With a mintage limit of just 1,500, we urge immediate action if you wish to secure one of these stunning and historic low mintage beauties! Born Lady Diana Frances Spencer into the British nobility on July 1, 1961, Diana grew up close to the royal family's private Sandringham estate in Norfolk, England.

The youngest daughter of John Spencer, 8th Earl Spencer, and Frances Shand Kydd, Diana was strongly affected by their divorce in 1967. She did not distinguish herself academically, but was talented in music, dance, and sports. In 1978, she moved to London, where she lived with flatmates and took on various low-paying jobs.

All of this changed when Prince Charles, the heir to the British throne, began to pursue her seriously. Diana came to prominence in 1981 upon her engagement to Charles, the eldest son of Queen Elizabeth II, after a brief courtship. Their wedding took place at St Paul's Cathedral in 1981 and made her Princess of Wales, a role in which she was enthusiastically received by the public. Diana was celebrated for her unconventional approach to charity work.

Her patronages initially centered on children and youth, but she later became known for her involvement with AIDS patients and the campaign to remove landmines. She also raised awareness and advocated ways to help people affected with cancer and mental illness. As princess, Diana was initially noted for her shyness, but her charisma, sincerity and friendliness endeared her to the public and helped her reputation survive the acrimonious collapse of her marriage. Considered very photogenic, if not downright beautiful, she was an icon of high style and fashion in the 1980s and 1990s.

Charles and Diana had two sons, the princes William and Harry, who were then second and third in the line of succession to the British throne. Diana's marriage to Charles, however, suffered due to their incompatibility and extramarital affairs. They separated in 1992, soon after the breakdown of their relationship became public knowledge. The details of their marital difficulties became increasingly publicized, their marriage ending in divorce in 1996. Tragically, Princess Diana, the People's Princess, died in a car crash in Paris in 1997.

The outpouring of grief, not just from the British public, but from around the world, was unprecedented, resulting in global media attention, and the poignant scene of her two sons walking along behind her coffin during the funeral procession through the streets of London. A full color portrait of Princess Diana facing three quarters left, wearing her famous diamond tiara. To her left is a large rose bouquet, with each individual rose bud and blossom accentuated in 24-karat rose gold plating. The legends DIANA and PRINCESS OF WALES denote the theme.

Her Majesty, Queen Elizabeth II, in crowned profile facing right. This portrait, featuring Her Majesty wearing a tiara and pearl earrings, was executed by the artist and engraver Jody Clark. The legend ELIZABETH II, the date of issue and denomination also appear. The legend 1 OZ 999 AG guarantees the weight and purity.

The coin is encapsulated inside an elegant, luxury presentation case, lined with black velveteen and sateen, protected by a full-color outer box. A full-color, individually-numbered certificate of authenticity is included. Image of the back side of the certificate is mint-supplied and for general reference only. Serial number on image is NOT indicative of the serial number you will receive! Proof with Full Color and Rose-Gold Plating.

The Island Nation of Tokelau. Tokelau (previously known as the Union Islands, and officially as Tokelau Islands until 1976; literally means "north-northeast") is a sovereign Polynesian republic and dependent territory of New Zealand in the southern Pacific Ocean. It consists of three tropical coral atolls (Atafu, Nukunonu and Fakaofo), with a combined land area of 10 sq km (4 sq mi). The capital rotates yearly among the three atolls. Tokelau lies north of the Samoan Islands, east of Tuvalu, south of the Phoenix Islands, southwest of the more distant Line Islands, and northwest of the Cook Islands. Swains Island is geographically part of Tokelau, but is subject to an ongoing territorial dispute and is currently administered by the United States as part of American Samoa. The item "Tokelau 2021 Princess Diana of Wales $5 1 Oz Pure Silver Rose Gold Color Proof" is in sale since Sunday, May 30, 2021. This item is in the category "Coins & Paper Money\Coins\ World\Australia & Oceania\Australia\Commemorative". The seller is "talismancoins" and is located in Saint Louis, Missouri. This item can be shipped worldwide.