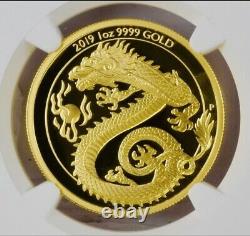 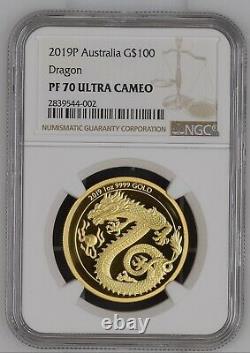 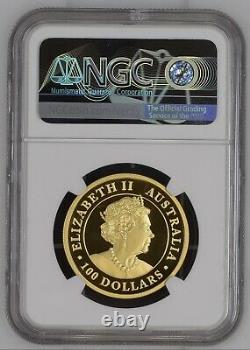 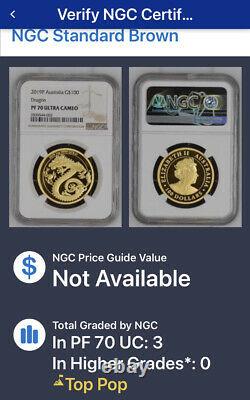 1 oz 9999 gold dragon NGC certified pf70. 1 of only 3 with a perfect grade. In traditional Chinese culture, the dragon is revered as a divine creature and potent symbol of power, strength, wealth and good fortune. It is often portrayed chasing a flaming pearl, which is a metaphor for wisdom and enlightenment. The glistening gem is traditionally illustrated swirling through cloud and mist, to represent the elusive nature of these qualities.

Imperial dragons are typically shown with their eyes wide open and their mouths gaping, as they endeavor to capture the elusive treasure. Because of the desirability of the dragon theme, the full proof finish, the significant one full troy ounce of pure gold-to say nothing of the tiny mintage of just 188-a rapid sell-out at the Mint was expected and has occurred! The Mythical Dragon and the Flaming Pearl. The dragon is often portrayed chasing a luminous or flaming pearl. In Chinese culture, the dragon is revered as a divine mythical creature, a symbol of power, strength, wealth, and good fortune. The pearl is viewed as a metaphor for wisdom, enlightenment and spiritual essence. It is also said to rid a person of their troubles, bringing career success as well as good fortune, wealth and good health. From an artistic perspective, dragons are frequently depicted in pursuit of the flaming pearl. To represent the elusive nature of wisdom and enlightenment, the pearl is typically represented as swirling through mist, smoke, cloud and shadow. The dragons are traditionally shown with their their eyes wide open and their mouths agape, as they endeavor to catch this eternal treasure, the pearl! The Oriental or Chinese concept of the dragon is much different than the European notion of this beast.

Whereas in the West dragons are nearly always evil, fire breathing creatures of immense size and destructiveness, in the East they are beloved. Chinese dragons are benevolent, representing most auspicious powers, particularly control over water, rainfall, and floods. In yin and yang terminology, a dragon is yang (male) and perfectly complements a yin (female) fenghuang, the mythical "Chinese phoenix". The dragon is a mystical being, able to use an almost unlimited range of magical or supernatural powers. It is able to disguise itself as a silkworm, or become as large as our entire universe.

It can fly among the clouds or hide in water. It can form clouds, turn into water or fire, become invisible or glow in the dark. It is interesting to note that the Oriental dragon's ability to fly is a magical (not a physical) ability; unlike European dragons, Chinese dragons are rarely if ever depicted with physical wings. Historically, the dragon was the symbol of the Emperor of China. Many pictures of oriental dragons show a flaming pearl under their chin. The pearl is associated with wealth, good luck, and prosperity. In Chinese culture, the pearl also symbolizes perfection, which is only obtained through the highest forms of wisdom. As such, the pearl is retained in the clutches of the dragon, who, like the emperor, reveals great "pearls of wisdom" as it bestows abundance and prosperity upon its people. The coin's obverse depicts a Chinese dragon in pursuit of a flaming pearl. The legend 1 OZ 9999 GOLD guarantees the weight and purity. The date is also indicated.

The reverse features Her Majesty, Queen Elizabeth II, in crowned profile facing right. This portrait, featuring Her Majesty wearing pearl drop earrings, was executed by the artist Jody Clark. The Perth Mint's "P" mint mark is located at 3:00 near the edge. The legend ELIZABETH II and the denomination also appear. The coin is in ngc certified slab to protect and ensure the pristine quality for decades to come.

This item is in the category "Coins & Paper Money\Bullion\Gold\Coins". The seller is "ucanseme" and is located in this country: US. This item can be shipped to United States, Canada.