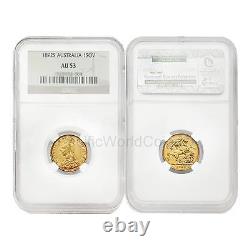 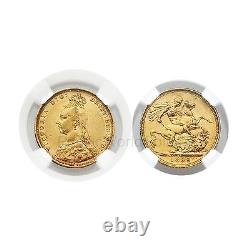 World Gold & Platinum Coins. Australia 1892M Sovereign Gold NGC AU53. George slaying dragon, mint mark above date. Use of Store Images We often have multiple quantities available of many of our most popular products. As a result we often use "Stock Images" to represent the actual product.

Errors and Omissions Prices and availability of products and services are subject to change without notice. Errors will be corrected where discovered, and PWC reserves the right to revoke any stated offer and to correct any errors, inaccuracies or omissions including after an order has been submitted and whether or not the order has been confirmed.

All orders subject to acceptance. Using digital video, we record the packing of our products to affirm accuracy. We may ask you to file a police report if it appears loss is due to theft or tampering.

This item is in the category "Coins & Paper Money\Bullion\Gold\Coins". The seller is "pacificworldcoins_inc" and is located in this country: US. This item can be shipped to United States, all countries in Europe, all countries in continental Asia, Canada, Brazil, Australia, New Zealand.