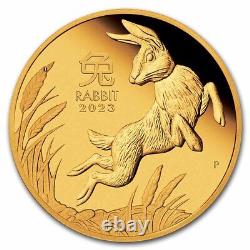 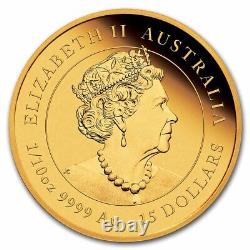 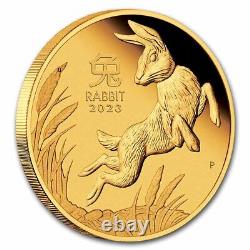 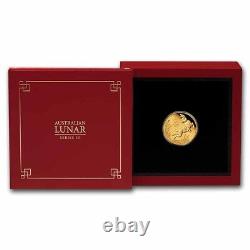 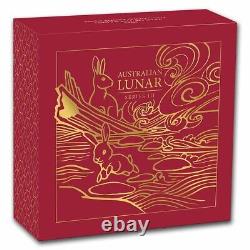 2023 Australia 1/10 oz Gold Lunar Rabbit Proof (w/Box & COA) - SKU#259028. Photos in this listing may or may not be stock photos. The photos are meant to be an indication of the product you will receive.

Only 2,500 coins will be issued in this special packaging, with an overall maximum mintage of 5,000 coins. Each coin is presented in a prestigious red display case with a magnetic lid. Adorned with Gold lettering and a geometric design, the case is packaged in a beautifully illustrated shipper portraying the story of how the rabbit became an animal in the zodiac, and is accompanied by a numbered certificate of authenticity.

Obverse: Features the Jody Clark effigy of Her Majesty Queen Elizabeth II, the weight and fineness, and the monetary denomination. Reverse: Portrays a leaping rabbit among grasses with feathery plumes. Also included in the design is the Chinese character for rabbit, the inscription RABBIT 2023 and The Perth Mint's P mint mark. Sovereign coin backed by the Australian government. Protect your capsules from fingerprints by adding these cotton gloves. Continue your Lunar Series III collection today by adding this stunning Gold Proof Year of the Rabbit coin to your cart today!

When arrayed together, the shipper boxes on all future Lunar Series III Proof Gold releases will form a diorama depicting the ancient myth of The Great Race, which explains how the zodiac calendar came into being. Struck by the historic Perth Mint from. 9999 fine Gold, each coin's Australian legal tender status guarantees its weight and purity. Lunar Year of the Rabbit. The Perth Mint's Australian Lunar Series III collection continues the rich tradition of minting spectacular bullion coins by portraying animal themes from the Chinese lunar calendar.

The reverse design changes each year based on the Chinese lunar calendar, and the 2023 reverse celebrates the Year of the Rabbit. Those born under the sign of the Chinese lunar rabbit in 2023, 2011, 1999, 1987, 1975 and every 12. Preceding year are said to be intelligent, creative, vigilant and compassionate.

The Perth Mint Lunar Series Known for their quality and collectibility, The Perth Mint Lunar series is a cornerstone of many Precious Metals portfolios. The original lunar bullion series. These coins (beginning with the Series I launch in 1996) have become some of the most widely collected around the globe, as demand originated in Asia but spread to Europe and America as investors became exposed to the design and quality. In addition to the annual design change, many investors love that the coins' select mintage limits create the potential for even greater investment return in the form of a numismatic premium appreciation. 1,359 Item as described. Rec'd item, looking forward to doing business with again.

This item is in the category "Coins & Paper Money\Coins: World\Australia & Oceania\Australia\Gold". The seller is "apmex" and is located in this country: US. This item can be shipped worldwide.