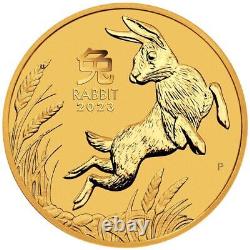 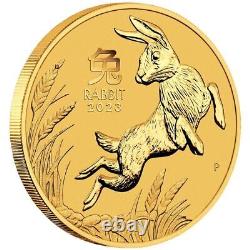 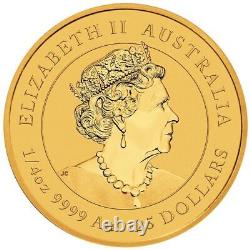 Perth Mint's Australian Lunar Series III collection continues the rich tradition of minting spectacular bullion coins by portraying animal themes from the Chinese lunar calendar. The reverse design changes each year based on the Chinese lunar calendar, and the 2023 reverse celebrates the Year of the Rabbit. Those born under the sign of the Chinese lunar rabbit in 2023, 2011, 1999, 1987, 1975 and every 12th year prior are thought to be particularly intelligent, creative, vigilant and compassionate. The 2023 Year of the Rabbit design is similar among all the different gold coin weights this year. The coin's reverse portrays a wild rabbit in mid-leap, framed by tall prairie grasses (designed by familiar Perth Mint artist Ing Ing Jong).

This creature is presented in an unusual and dynamic pose, as if distracted by something extremely interesting behind it. Its hindquarters are still extended, so clearly it's just left the ground, yet its head is twisted to look over its shoulder, and its forelimbs are twisted to the side.

There's no way to know for sure, yet somehow the posture captures the rabbit's acrobatic capabilities along with the intelligence and vigilance characteristic of those born under the Year of the Rabbit. Included in the design is? The Chinese character for "rabbit, ", the inscription'RABBIT 2023' and Perth Mint's legendary "P" mintmark. Depicts the Jody Clark portrait of Her Majesty Queen Elizabeth II even though her reign ended in 2022 - presumably, Perth Mint already had these coins planned before we received news of Her Majesty's passing? The Australian Lunar Series III has been a hit with collectors worldwide, and this fourth of the twelve annual designs in an affordable fractional weight probably won't last long. 2023 1/4 oz Australian Lunar Year of the Rabbit gold bullion coin highlights. Fourth of twelve annual designs in Perth Mint's Series III Lunar New Year series. Popular fractional size of 1/4 oz 0.9999 pure gold (more affordable than heavier coins). Unusual combination of 2023 mintage year and Her Majesty Queen Elizabeth II (whose reign ended in 2022). May add to future collectible value. About the Perth Mint Lunar New Year coin series. A landmark coin series of the highest regard, The Perth Mint Gold Lunar coins package beautiful designs, limited mintages and universal appeal all in one program.

Struck by the historic Perth Mint in 0.9999 fine gold since 1996, each coin's Australian legal tender status guarantees its weight and purity. Beginning in 2020 and scheduled for yearly releases through 2031, The Perth Mint's Australian Lunar Series III collection continues the rich tradition of minting spectacular bullion coins by portraying animal themes from the Chinese lunar calendar. Today, The Perth Mint Lunar coins are available in multiple sizes in gold, silver and platinum, in both proof and bullion grades. The Perth Lunar Series 1 concluded in 2010, and Series II concluded in 2019. We're now in the fourth year, and fourth design, of Series III.

This item is in the category "Coins & Paper Money\Bullion\Gold\Coins". The seller is "officialbullionmax" and is located in this country: US. This item can be shipped to United States.