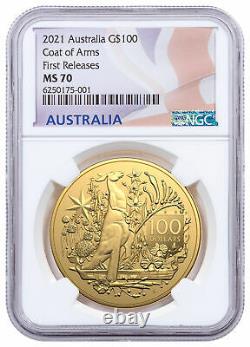 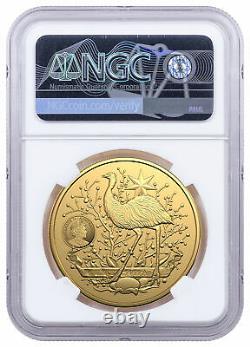 The current Arms associated with the identity of the Commonwealth of Australia has been in use since 1912. Imagery of the coin draws inspiration from the Arms' powerful symbolism, depicting the Australian native emu and kangaroo, which are representations of progress, because they are each unable to physically move backwards. The coin's obverse and reverse images also include the Arms' element of the Commonwealth Star; six points of the star represent the six states of Australia, with the seventh point signifying the Australian territories. This 2021 Australian Coat of Arms coin is struck from 1 Troy oz. The bullion coin measures 38.74 mm in diameter.

The coin received the First Releases designation. Mintage is limited to only 5,000 pieces.

Obverse: On the obverse, a field of golden wattle, the Commonwealth's official floral emblem, and the Commonwealth Star, appear as the background to a gorgeously rendered standing emu. The portrait of Her Majesty Queen Elizabeth II, designed by acclaimed British Royal Mint sculptor Jody Clark in 2015, is cleverly depicted on an inset within the plant's complex framework. A nest containing a cache of unhatched eggs is located at the emu's triple-toed feet, near a fluttering banner inscribed with 1 OUNCE.

" Additional inscriptions include "ELIZABETH II" and "AUSTRALIA 2021. Reverse: The reverse features a kangaroo gazing upward, as its joey emerges with curiosity from its pouch.

The standing creature is surrounded by a spectacular array of symbolic elements. A heraldic shield replicating the style upon the Arms, adorned with the coin's denomination of "100 DOLLARS, " and the Commonwealth Star are nestled amongst a jungle of blooms. Each of the flowers included in the image is an identifying floral symbol for one of the six states and three territories of Australia.

Similar to the Arms, a scroll below boldly holds the declaration AUSTRALIA. Imagery celebrating the Arms is credited to Aaron Baggio, a Royal Australian Mint coin designer and sculptor since 2008.

This 2021 Australian Coat of Arms 1 oz. For submission to the grading service within thirty days of release, the coin also qualified for the collectible First Releases designation. The magnificent coin is encased in a protective NGC holder accompanied by a stylish certification label ornamented with the flag of Australia.

Don't miss your chance to add this low mintage, perfectly graded 1 oz. Gold bullion 2021 Australian Coat of Arms coin to your collection! We cannot make any price adjustments after the sale is complete. Product Photo Policy: MCM attempts to display product images shown on the site as accurately as possible. We take all of our photos in house and due to reflections on the mirrored or proof surfaces of a coin there may appear to be'black' when there is not.

If a coin has a color on it at all it will be described as'colorized' in the description or title. Due to the large inventory we sell, we use stock photos.

Serial numbers will vary from the image shown unless specifically stated in the product listing that the item pictured is the item you will receive. INTERNATIONAL ORDERS POLICY: We are accepting international orders from select countries. These charges are the customer's responsibility. However, we cannot guarantee this due to the volume of orders we process each day.

Beyond the 30-day return period, Company is under no obligation to accept return of any product, but may in its discretion do so pursuant to this policy, for up to one year from the invoice date. ModernCoinMart (MCM) was launched in 2004 and quickly set the standards for online sales of bullion, US coins and world coins.