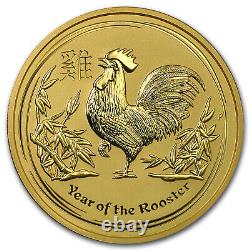 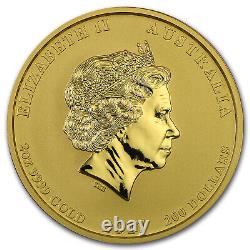 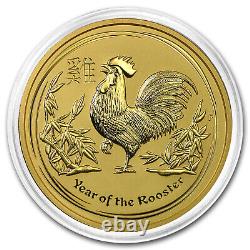 2017 Australia 2 oz Gold Lunar Rooster BU - SKU #102654. Photos in this listing may or may not be stock photos. The photos are meant to be an indication of the product you will receive. These striking 2017 2 oz Gold coins, produced by Perth Mint, celebrate the Year of the Rooster and are dated to commemorate the event. The Year of the Rooster only comes around once every 12 years, so this design is not likely to be seen again.

A landmark coin series of the highest regard, the Perth Lunars package beautiful designs, limited mintages and universal appeal all in one program. Each coin comes in a protective plastic capsule. Obverse: The Ian Rank-Broadley likeness of Her Majesty Queen Elizabeth II, along with the Gold purity, year of issue, and face value. Reverse: Depicts a rooster standing in a stylized Chinese scene featuring bamboo and leaves in the field of the coin. This beautiful lunar design also incorporates the Chinese character for Rooster, the inscription Year of the Rooster, and The Perth Mint's traditional P mintmark. Sovereign coin backed by the Australian government. Add this spectacular 2 oz Gold Year of the Rooster coin to your cart today! Struck by the historic Perth Mint from 99.99% pure gold, each coin's Australian legal tender status guarantees its weight and purity.

Perth Mint's Australian Lunar Series II collection epitomizes the rich tradition of minting spectacular bullion coins by portraying animal themes from the Chinese Lunar calendar. The reverse design changes each year based on the Chinese lunar calendar, and the 2017 reverse celebrates the Year of the Rooster. The birth dates for people born in the Lunar Year of the Rooster include 1921, 1933, 1945, 1957, 1969, 1981, 1993, 2005 and 2017. Those born in these years are said to be hardworking, loyal, honest and sociable.

Known for their quality and collectibility, the Perth Mint Lunar series is a cornerstone of many precious metals portfolios. The original Lunar bullion series, these coins (beginning with the Series I launch in 1996) have become some of the most widely collected around the globe, as demand originated in Asia but spread to Europe and America as investors became exposed to the design and quality. In addition to the annual design change, many investors love that the coins' select mintage limits create the potential for even greater investment return in the form of a numismatic premium appreciation. This series is so popular, the 1 oz Gold and Silver Lunars are now instant sell-outs every year! 1,359 Item as described. Rec'd item, looking forward to doing business with again. This item is in the category "Coins & Paper Money\Bullion\Gold\Coins". The seller is "apmex" and is located in this country: US.