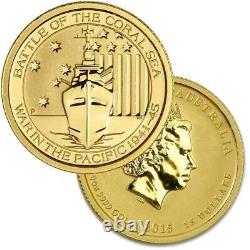 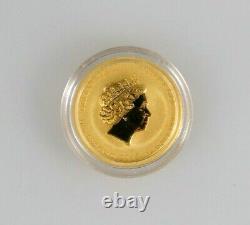 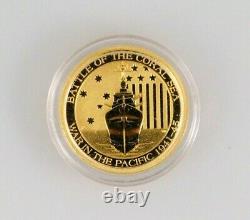 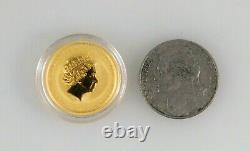 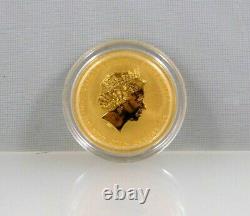 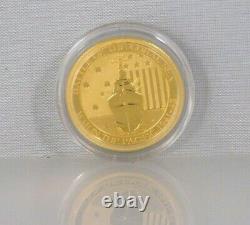 Please note that the nickel is for size reference only. The Battle of the Coral Sea was one of the first large-scale naval engagements the United States Navy participated in during its early days in the Pacific Theater of World War II. The battle marked one of the first engagements with United States forces and Australian forces standing shoulder to shoulder in the war. 9999 pure gold in BU condition. Obverse side includes the effigy of Queen Elizabeth II. Reverse features the image of a World War II-era battleship with commemorative engravings. The Battle of the Coral Sea took place in the waters between Australia, New Guinea, and the Solomon Islands. The goal of the Imperial Japanese Navys advancement was an invasion of Port Moresby. Though the battle is considered a tactical victory for the Japanese forces as they destroyed various Allied naval vessels, the Allies earned the strategic victory by preventing the invasion force.

Coral Sea took place from May 4 to May 8, 1942. This oz gold bullion coin was issued to commemorative the collaboration between American and Australian forces. The Allied task force consisted of two United States Navy carrier task forces and a joint Australian-American cruiser force. The item "2015 Australian 1/4 oz. Battle of The Coral Sea.