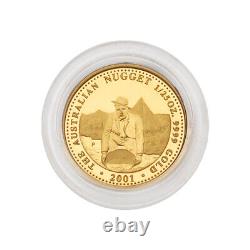 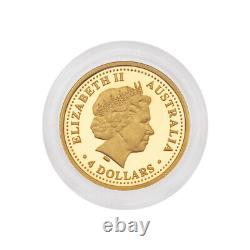 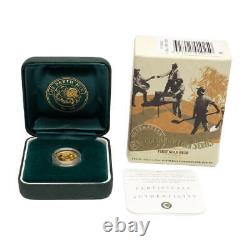 2001 The Australian Nugget 1/25oz. This is one of five designs in the 1/25oz Australian Prospector companion series of Proof Nugget coins, which celebrates the significance of gold in Australia history. The 2001 dated coin depicts a 19th century digger panning for gold and commemorates the 150th anniversary of the first payable gold discovery in Australia at Ophir, New South Wales in 1851.

The Perth Mint's traditional'P' mint mark also appears in the design. The obverse depicts the Ian Rank-Broadley effigy of Her Majesty Queen Elizabeth II and 4 DOLLARS denomination. AUTHENTICATION The coin includes a certification of authenticity.

PRESENTATION The Prospector coin 1/25oz Gold Proof Coin is presented in a protective acrylic capsule in clam shell case with original box. Please note that this item has been sourced from a private collection and may show slight markings on the packaging. During periods of high demand, delays may occur.

All precious metal sales including bullion and numismatics are final. Were also a boutique retailer of precious metal products that include jewellery, rounds, coins, bullion, nuggets and numismatics. Visit Us: Swan Bullion Company Suite 7/2155 Albany Hwy Gosnells WA 6110. Sign up to our newsletter for special deals. This item is in the category "Coins\Bullion\Gold\Coins & Rounds". The seller is "swanbullion" and is located in this country: AU. This item can be shipped to Australia, United States, Canada, Germany, Hong Kong, New Zealand.