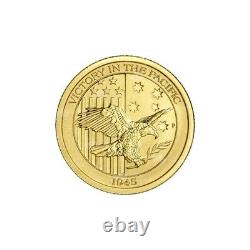 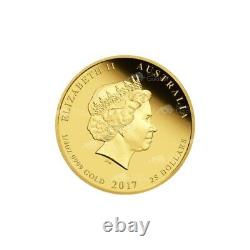 4+ tube of Silver Coins. 1/4 oz Random Year Victory in the Pacific Gold Coin. During World War II, the Pacific theatre of war was host to several decisive battles that ultimately determined the outcome of the war.

Millions of soldiers and civilians perished in conflicts, as axis forces led by the Empire of Japan, in an affront to seize complete control of the entire Pacific coast. Ultimately, the allied forces led by The United States and Australia gained a decisive victory in pivotal battles in both naval and land combat.

This 1/4 oz 9999 pure gold coin of the Perth Mint commemorates the leading nations that were involved in obtaining that victory and ultimately bringing an end to the fighting and peace. The Battle of the Coral Sea, waged by the axis force of Japan against the allied forces of the United States and Australia, was an extremely significant event in both World War II and Modern warfare as we know it today.

The Battle of the Coral Sea was the first of its kind, as aircraft carriers engaged against one other, for the first time in history, without direct fire on opposing vessels. This event caused the Generals of each nation to adapt their strategies and tactics to the demands of heavy artillery naval warfare. The Battle of the Coral sea changed the tide of the war, completely. Although the allied forces incurred heavy losses, two critical components of the Imperial Japanese fleet, the Shokaku, and Zuikaku aircraft carriers were compromised. With these significant components out of the war, the allied forces obtained a weapons advantage and were able to establish victory in the ensuing battles, primarily in the Battle of Midway. Thus, the Battle of the Coral Sea served as a turning point in World War II, serving as a precursor for subsequent victories. This ultimately led to the final surrender of the axis forces, and the end to World War II. These gold coins are an homage to the troops that worked together to liberate the Pacific of the Axis influence. This remarkable story is reflected on this exceptional 1/4 oz.

9999 pure gold coin, by the Perth Mint. The historical Hay Street location handled gold refining until moving to a modern facility in April 1990. Ownership of the mint was transferred to the Government of Western Australia in July of 1970. Under an agreement with the Commonwealth Treasury, they were empowered to mint and market gold, silver, and platinum as Australian legal tender to investors and collectors worldwide. Today, they are amongst one of the elite world mints whose pure gold, silver, and platinum items are trusted without question.

This item is in the category "Coins & Paper Money\Bullion\Gold\Coins". The seller is "silvergoldbullusa" and is located in this country: US.