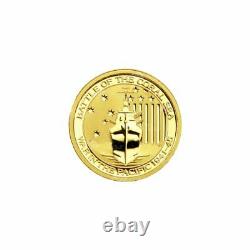 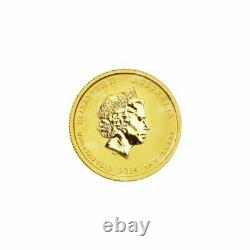 The Battle of the Coral Sea was the first of its kind, as aircraft carriers engaged against one other, for the first time in history, without direct fire on opposing vessels. This event caused the Generals of each nation to adapt their strategies and tactics to the demands of heavy artillery naval warfare. The Battle of the Coral sea changed the tide of the war altogether. This 1/2 oz, 999 pure gold coin from the Perth mint, commemorates this Battle. The reverse side illustrates an Attack vessel, afloat on the Pacific Ocean, seemingly prepared for Battle.

In coins background, stars and stripes are illustrated, indicative of the United States who participated in this Battle. The image is encapsulated by the title of the Battle, and the years in which the United States participated in World War II, instigated by the attack on Pearl Harbor. Held on the reverse is Ian Rank-Broadleys contemporary likeness of her majesty, Queen Elizabeth II. The bust reflects both the efforts of Americas, Australian allies, and the Perth mint.

This item is in the category "Coins & Paper Money\Bullion\Gold\Coins". The seller is "silvergoldbullusa" and is located in Las Vegas, Nevada. This item can be shipped to United States.